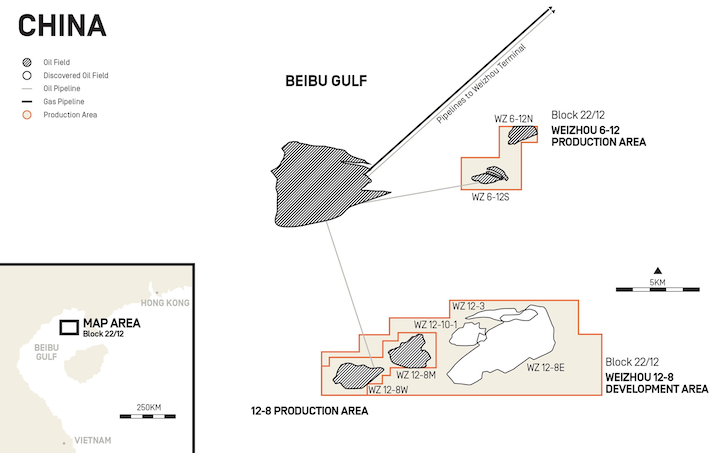 The US$55.6 million development includes five wells tapping the large, shallow Jiaowei reservoir and one well from the smaller nearby Weizhou reservoir. The initial aim is to recover about 2.2 million bbl of oil.

Depending on its production performance, the WZ12-8 East development will be the first phase of a potential multi-phase development within the Jiaowei target.

Horizon said the initial project will use the HYSY163 self-elevating wellhead platform which will be leased by the joint venture from EDC.

The platform will be linked to the existing WZ12-8 West platform via a new pipeline and subsea power cable. Oil will be exported via the current China National Offshore Oil Co. (CNOOC) facilities to the CNOOC terminal.

Production is expected to be 4,000 b/d of oil which will supplement the existing production from nearby WZ6-12 and WZ12-8 fields currently producing 9,200 b/d.

Fabrication of the WZ12-8 East facilities has begun, and the field is expected on stream during first-quarter 2022.

The project lies in Block 22/12, in which CNOOC is the overall operator in joint venture with Horizon, Roc Oil Ltd., and Majuko Corp.

Roc Oil will operate the WZ12-8 East development phase with CNOOC to assume operatorship 6 months after the start of production.

In addition to the new project, Horizon said that approval has also been given for a CNOOC-operated two-well infill drilling program from the existing WZ6-12 platform beginning late this year and targeting undeveloped reserves in the WZ6-12 region.

The two new wells will be tied into the existing facilities and are expected to begin producing in early 2021 at a combined rate of 1,900 b/d.